Style         :  A - Line Lehenga
Occasion : Party, Festival
Fabric       : Georgette
Color        :  Red
Work        : Embroidered, Weaving Print
Shipping Time would be 5-7 days from the order.
Divyanka Trupathi is an Indian television actress. Working in the Hindi television industry she become very famous in bollywood.  she is famous in  Zee TV and Star Plus channel. She got married with Vivek Dahia on July. The attire she was wearing become very famous.  She was wearing the red lehenga, it attracted many eyes and raised eye brows of many people.Now, the same style of lehenga is available with in our store. Bollywood fans can avail this chance and get the same style of her.
Why Red color Outfit for wedding?
There are two reasons for choosing red color outfit for wedding,
In USA and UK Red means something wrong or error, but in Indian Tradition red color symbolizes Kind, bravery, strength and commitment.In Indian Tradition, marriage is not only the affair between the groom and bride but it is the engagement between two families. Also most Indian families are joint family, two and three generations of the people live in same house. When a girl is getting married to a family she has to be brave, strength and should be kind and love their family and should be committed to the family she is getting married.Since the red is the only color that has all the quality to symbolize, all Indian Traditional marriages the girl wears the red color in saree or lehenga. This Red color traditional things not only applicable to the Indian people in Indian but will also be applicable for the Indian people who lives in USA, UK and Canada and all other parts of the world. The second reason would be as Indian traditional marriages are full of rituals. Wedding is treated as biggest ritual than treated as party. In Rituals, color plays vital role. Red and yellow color will be treated color for rituals. Almost red and yellow color will be in some form of any Indian rituals. Jewels and attire captures the yellow and Red color respectively
Why Lehenga for wedding?
Usually Indian Traditional marriages bride wear saree. Indian women wants to look traditional as well as modern, So Lehenga is the obvious choice, Lehenga is best alternate for sarees since all bridal sarees are heavier.  Bride will easily become tired of wearing the heavier saree, to avoid this lehenga will be chosen for the marriage.

For more details about the product, please look at the below video.
Wash Care: Dry Wash Only

The first wash of the garment should always be Dry-Cleaned or Gentle wash.
Jewelry, Sandals and other Accessories wear by models in photographs are for display purposes only.
The shades may vary slightly from the colors displayed on your screen.
Extra material may have been used for modeling purpose.
The items listed under bollywood store and designer boutique are only replicas (not same) Images given are reference purpose only. Those items will NOT be considered for any return/exchange or refund for any cases 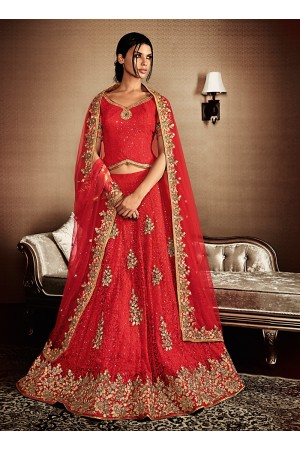